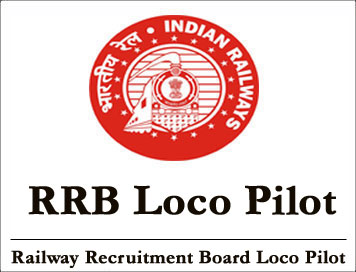 Q2. Choose the figure that is different from the rest. 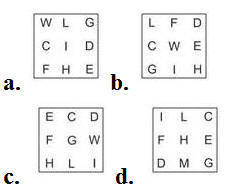 Q3. Here are some words from an artificial language.

Which set of letters would indicate ‘super rich’ in that artificial language?

Q4. Which of the following is an example of a third class lever?

Q5. The sentences given in the question, which properly sequenced, from a coberent paragraph. Each sentence is labeled with a letter. Choose the most logical order of sentences from among the given choices to construct a coherent paragraph.

Statement 1: All boots are sneakers.
Statement 2: All sneakers are shoes.

Q10. Choose the set of letters that is different from the rest.

Q12. Choose the word that is different from the rest.

Q18. In the question, two statements are given, followed by three conclusions I,II,and III. You have to consider the statements to be true even if they were seen to be at variance from commonly known facts. You have to decide which of the given conclusions, if any, follow(s) form the given statements.

Statement 1: some huts are cabins.
Statement  2: No cabins are cottages.

Q20. A statement is given, followed by two conclusions. Details which of the given conclusions can definitely be drawn from the given statement.

Statement: Quality food is expensive. The restaurant owners  are renovating the restaurant as the furniture has become old.

Conclusion I: The quality of the restaurant’s food will improve.
Conclusion II: All restaurants have to be renovated when their furniture becomes old.

Q21. The given Venn diagram shows the number of students in a class who play a particular sport. How many students play Hockey as well as Football? 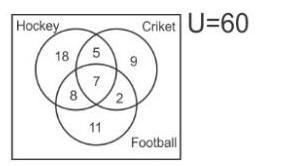 Q22. One statement is given followed by two assumptions, I & II. You have to consider the statement to be true, even if it seems to be at variance from commonly known facts. You are to decide which of the given assumptions is/are implicit in the given statement.

Q23. What is the angle between the hour hand and the minute hand at quarter to five?