(A) 15 - (Optional 2)
(B) 17 - (Optional 1)
(C) 12 - (Optional 3)
(D) 13 - (Optional 4)
Question no.57
Carefully read the given information and answer the given questions.
A compartment of 7 compartments is kept on one table. Each box of stacks has a special vegetable. Carrots, onions, potatoes, cabbage, beans, pumpkins and ground vegetables are vegetables. Dump pile is counted in the order of 1, 2, 3 .... below.
i) Carrot has been placed in any number of cans.
ii) Cauliflower is not kept in the top tin box.
iii) Potatoes are placed in a box kept in the middle of the pile.
iv) The beans are placed in the pot top of the potato.
v) Pumpkin is placed in the same number of carbohydrate under the carrots.
vi) Potato is kept in the box which is neither close to the bean bins nor the cabbage box.  vii) Zimbabwe is not in the No. 5 box.
Which vegetable is kept between carrots and potato bins?
(A) Beans - (Alternative 1)
(B) Landing - (Alternative 3)
(C) Onions - (Alternative 2)
(D) Pumpkin - (Alternative 4)
Question no.58
If a mirror is placed on the shaded line, which of the following options is the correct image of the given shape? 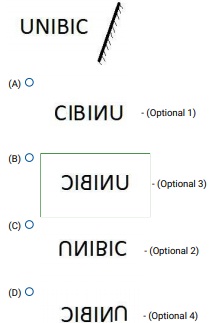 Question No.59
Select the appropriate picture to come forward in the given series. 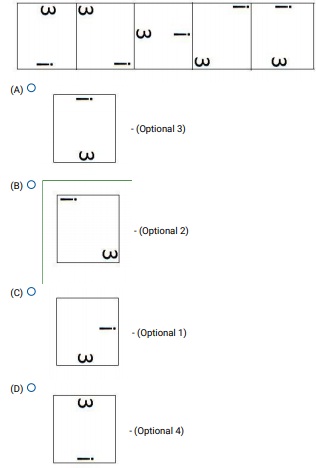 Question No.60
How straight lines are there in the given picture?

Question No.61
Select the correct option which will complete the format of the given image.

(A) D - (Alternative 2)
(B) B - (Alternative 4)
(C) A - (Alternative 3)
(D) C - (Alternative 1)
Question No.71
Find the next number in the category.
50, 52, 55, 60, 67,?
(A) 81 - (Alternative 3)
(B) 82 - (Alternative 4)
(C) 78 - (Optional 1)
(D) 79 - (Alternative 2)
Question No.72
A statement in this question and two related findings have been given in the form of i and ii, assuming that the statements given in the statements to be true are to make sure that the conclusions regarding the statements are logical?
Statement: The schools in which the ratio of the number of teachers in proportion to the number of students is higher, they provide better education. ABC is a school with very little student numbers.
Conclusion:
i. School ABC provides better education.
ii. Where there is a high proportion of the number of teachers in proportion to the number of students, there will be more attention to the children.
Choose the right one from the following options.
(A) The only i conclusion is correct.
(B) Only ii conclusions are correct.
(C) either i conclusion or ii is correct.
(D) neither i conclusion nor ii is correct.
(E) Both i and ii findings are correct
(A) B - (Alternative 2)
(B) E - (Alternative 4)
(C) A - (Alternative 1)
(D) C - (Alternative 3)
Question No.73
Three statements in this question and three related conclusions have been given to them, assuming you are truthful, it is to make sure that the conclusions related to the statements are logical?
Statement. All crows are hens. All poultry is pigeon. There are some chickens.
Conclusion: i) All crows are pigeons.
ii) Some crows are birds.
iii) Some birds are pigeons.
(A) Only i and iii - (optional 3)
(B) Only i - (Optional 4)
(C) I and ii only - (Alternative 2)
(D) All - (Optional 1)
Question No.74
In this question, a passage and a statement related to it have been given. Read carefully the verse and review the statement based on it.
RAW JARGER, wildlife conservation officer of Andhra Pradesh, says that about 3 lakh birds of different castes have reached Kashmir Valley. In general, approximately 9 lakh birds each year come from various cold regions of the world in the Kashmir valley. Therefore, the people of the valley get new species of birds every year, birds can fly into any place and can go to any place. At this time Kashmir is less cold compared to its original original natural habitat, so that in the month of September every year Kashmir is in decline.
These birds can be helpful in promoting the valley in tourism. Ahmed, Shikara's owner, has to say that after the devastating incident of 2016, the arrival of tourists in the valley has decreased considerably. These migratory birds can fulfill this vacuum by attracting tourists from all over the world. Therefore, if the tourism department promotes it in a planned manner, it promotes it at a large scale, it will promote tourism in the valley.
Statement: Birds come in Kashmir Valley because it is cooler than their native natural habitats.
Choose one of the following options.
A. The statement is definitely true.
B. The statement is probably true.
C. Statement can not be determined
D. Statement is definitely wrong.
(A) B - (Alternative 2)
(B) A - (Alternative 1)
(C) D - (Alternative 4)
(D) C - (Alternative 3)
Question No.75
How many right-angled triangles can be made from given figures? 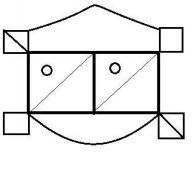 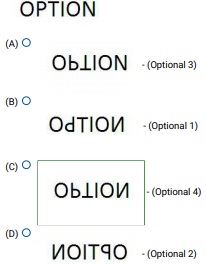 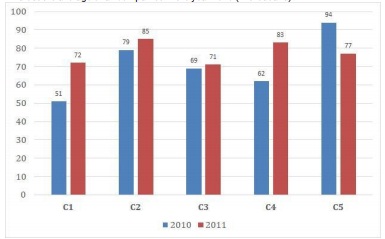 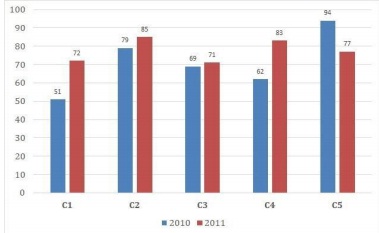 >>Go Back to Main Page