Q1. Read the given question and decide which of the following statements is/are sufficient to answer the question?
What is the age of Sriram?

Q2. Which answer figures will come next in the given problem figure series? 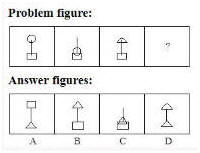 Q3. Read the given statement and conclusion carefully and select which of the conclusions logically follow from the statement.

Conclusion:
1. All containers are mud.
2. Some vessels are mud

I. The indisposed waste caused a lot of harm to our environment and breeds various diseases.
II. It will certainly be helpful to address public or students at any institution on waste management.

Q5. Joy points out to a picture and says, ‘This is my mother’s sister’s husband,’ How is the person in the picture related to Joy?

Q6. Identify the founder of Paytm who was listed in TIME magazine’s most influential people list 2017 along with Prime Minister Narendra Modi?

Q7. Choose the most suitable Venn diagram for the following words.

Q8. Choose the mirror image for the following figure when the mirror is kept at the MN line.

Q9. Which of the options bears the closest resemblance to the following figure?

Q10. Consider the given statement and decide which of the following assumptions is/are implicit in the statement.

Q11. Which of the option figures bears the closed resemblance to the question figure?

Q12. If KIN is written as PRM then how would you write THREAD?

Q13. Which of the following Venn diagram correctly represents the relationship between:

A. Mobile
B. Laptop
C. Electronic

Q14. In which of the following activities is work said to be done?

a. Pinki is walking on a leveled road with a book on her head
b. Khishi is pushing a wall of a house but fails to do so
c. Harsh is reading a book
d. Shruti is sitting on a chair

Q16. Which assumptions are implied from the below statement?

“Trees can communicate and share nutrients with other trees in a forest” says a scientist.

I. Plants share extra nutrients with other plants
II. Underneath the earth everything is connected.

Q17. Which of the following does NOT belong to this group?

Q18. Find the next letter-pair in the following series.

Q19. Choose the one that does NOT belong to the group.

I. The more we exploit and degrade out environment, the more ecological imbalance we create, ultimately putting the very existence of human life at risk.
II. Every species is dependent on every other species for survival, directly or indirectly. Human beings are the ones who depend on maximum number of species for not only our survival but also for our development needs.

Q23. If “MAP” is coded as KYN in a code language, how will “REDUCE” be written in the same code?

Q24. Read the given statement and conclusion carefully and select which of the conclusions logically follow from the statement

Q25. Sarang is facing West. He turns 135° clockwise and then 45° anticlockwise. In which direction he is facing now?

Q26. Find the missing term in the following series.

Q27. Soham is 10 years younger than partha. Eight years ago three times the age of soham was 4 more than twice the age of Partha. Find Soham’s present age.

Q28. What is the next term is this series:

Q30. Select the option figure that will complete the series of question figures.