Q1. If KNIFE is coded as MPKHG, then what does the code DTGCF stand for ?

Q3. If after 3 days of tomorrow is Friday, what day was three days before yesterday ?

a. Friday
b. Thursday
c. Tuesday
d. None of the above

Q7. Read the given question and decide which of the following statement is/are sufficient to answer the question.

Who is standing in the middle among Y, O and P?

Q10. From the following alternatives select the word which can’t be formed by using the letters of the word.
ESTRANGEMENT

Q12. In question, some statements are given, followed by two conclusions I and II. You have to consider the statements to be true, even if they seem to be at variance from commonly known facts. You have to decide which of the given conclusions, if any, follows from the given statements. Indicate your answer.

Statements:
All mobiles are laptops.
Some laptops are tablets.

Q13. Count the number of squares in the given figure. 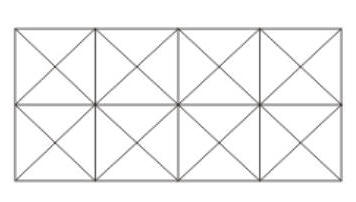 Q15. How many such pair(s) of letters are there in the word ‘POCKETBOOK’ which have as many letters between them as in the alphabetical series as we move from left to right?

Q18. Select the one which is different from the other three responses.

Q19. If first and third digits of each number are interchanged and then numbers are arranged in ascending order then which of the following will be the second number from right end?

Statement : Footpaths of a busy road are crowded with vendors selling cheap items.

Courses of action :
I. The help of police should be sought to drive them away.
II. Some space should be provided to them where they can earn their bread without blocking footpaths.

a. Only I follows
b. Only II follows
c. Both I and II follow
d. Neither I or II follows

Q21. Directions: Study the following information carefully and answer the questions given beside:
Garv is the son of Sashi. Heer is the father of Manu. Garv is married to Devi. Garv and Manu are siblings. Prem is the brother of Devi. Sashi has only one son. Riya is the son of Garv. Prem is the father of Kaka. Joshi is the daughter of Manu. Prem has no daughters.
How many female(s) members are there in the family?

Statement: The sale of a particular product has gone down considerably causing great concern to the company.

Courses of action:
I. The company should make a proper study of rival products in the market.
II. The price of the product should be reduced and quality improved.

Q24. If all the digits are arranged in ascending order within each of the numbers and the product of first two digits of each new number is caculated, which of the following original number gives an odd number as resultant?

Q25. `Select the one which is different from the other three responses.

Q26. How many meaningful English words can be formed with the letters A, D, E and R using all the letters, and each letter only once in each word?

Q29. Six cars from C1 to C6 participated in a race. Which car stood at first position?