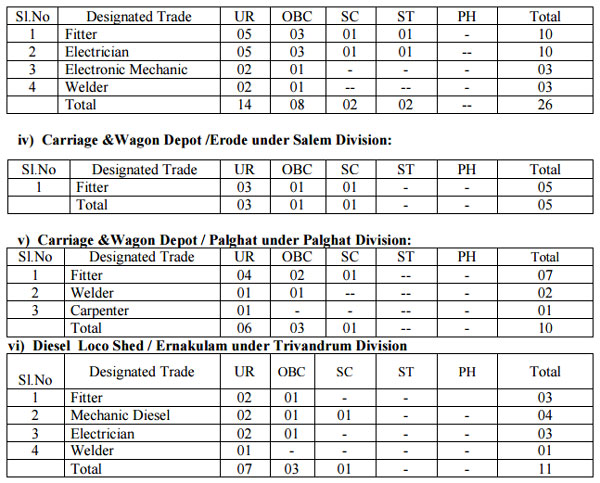 The age as on 22.4.2016 should have completed minimum 15years of age and should not have completed 24 years as on the cut – off date for receiving of application

Selection will be on the basis of merit list prepared in respect of all the candidates who apply against the notification. The merit list will be prepared by committee nominated for the purpose on the basis of percentage of marks in matriculation (with minimum 50% (aggregate) marks) plus ITI marks. In case of two candidates having the same marks, the candidates having older age shall be preferred. In case the dates of birth are also same, then the candidate who passed matriculation exam earlier shall be considered first.

(i) Applications must be submitted only in the prescribed format..

(ii) One passport size photo should be pasted in the application in the space provided duly attested by Gazetted Officer.

(iii) Applications form will be provided at the Chief Work shop Manager Office/S&T/WS/Podanur, Welfare inspector/S&T/WS/PTJ between 10.00 hrs and 13.00 hrs (on all working days) from 21-3-2016 to 22-4-2016 The Processing fee/Cost of application fee is `.100(Hundred only) which is not refundable is to be enclosed with the application form in this connection necessary postal order should be drawn in favour of the Work Shop Personnel Officer/S&T/Work Shop, Southern Railway-Podanur, Coimbatore-641 023 Payable at Coimbatore

The filled in application may be sent by ordinary/Registered post/dropped into allotted sealed box at S&T/Work shop/Podanur on or before 22.4.2016 super scribed as "Application for Apprenticeship Training – 2016-17 Ex.ITI”
Trade: and sent only by ordinary post /Registered post or drop at S&T/WS to